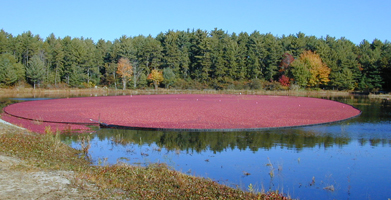 The single most important nutrient element in cranberry production is nitrogen. Nitrogen is required by cranberry plants for the production of vegetation (new leaves and stems), roots, and fruit (crop). Cranberry plants get nitrogen from the soil, from water (very little), or from added fertilizers.

Approximately 95% of the nitrogen in a given soil that becomes 'plant-available' in a single growing season comes from the decomposition of soil organic matter. Cranberries are grown in either organic soils modified by surface application of sand or in mineral soils. Average organic matter in the surface horizon of Massachusetts cranberry soils is less than 3.5%. The rooting zone typically contains about 95% sand; silt and clay make up less than 3% of the soil.

Nitrogen release from the soil organic matter depends on temperature and soil moisture status. The release process, known as mineralization, depends on bacterial activity in the soil. When the soil is waterlogged, the bacteria cannot get enough air to function well. As with many biological reactions, mineralization is also temperature dependent, tending to increase as the soil temperature increases. A second bacterial reaction, nitrification, where ammonium is further metabolized to nitrate, may also occur. This second reaction is unfavorable for cranberry production.

Each season, nitrogen is removed during harvest and detrashing (removal of fallen leaves from the bog floor). When the fruit is harvested, more than 20 lbs N/A is removed in an average (150 bbl/A) crop. The amount of nitrogen removal increases with increasing crop load and is reduced when crops are small. To compensate for this loss and to supplement natural N release from the soil, cranberry growers add fertilizer to their bogs. Unlike most horticultural crops, cranberries preferentially use ammonium nitrogen. Although cranberries can take up nitrate, this only happens in the presence of ammonium. Further, they have very low activity of the enzyme (nitrate reductase) that converts nitrate into metabolically usable ammonium inside the plant. Thus, it is unlikely that much of the nitrate taken up by cranberries is actually used in the plant. For this reason, fertilizers in which all of the nitrogen comes from ammonium (including urea) are recommended for cranberry production. This also serves to minimize the potential for loss of nitrate to the surrounding environment.

The required amount of added nitrogen fertilizer varies by season, cultivar, and general status (length, color) of the cranberry plants.