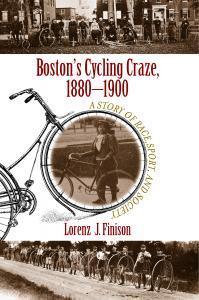 Supplemental content for Boston’s Cycling Craze, 1880-1900 by Lorenz J. Finison is available at through the link below. To order the monograph, please click on the link to the right "Order Finison's book".

From 1877 to 1896, the popularity of bicycles increased exponentially, and Boston was in on it from the start. The Boston Bicycle Club was the first in the nation, and the city’s cyclists formed the nucleus of a new national organization, the League of American Wheelmen. The sport was becoming a craze, and Massachusetts had the largest per capita membership in the league in the 1890s and the largest percentage of women members. Several prominent cycling magazines were published in Boston, making cycling a topic of press coverage and growing cultural influence as well as a form of recreation.