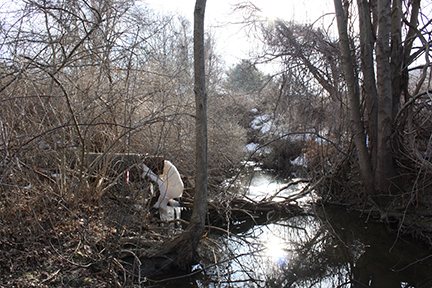 A heavily impacted urban stream system, the Tan Brook previously ran overland through downtown Amherst and UMass. As development progressed much of the Brook was buried in a series of pipes and used as a stormwater drainage system. Preliminary research has shown severe environmental damage typical to urban streams as well as drainage and flooding problems along its route. The Tan Brook Freshwater Sustainability Project will continue these efforts while helping to launch other studies that could help us better understand the Brook and its watershed. Students could work independently or with a faculty sponsored study to add to the Project while preparing themselves for a related profession. The Brook provides us with an opportunity to create a blueprint for other watersheds in a similar predicament while creating a way for young researchers to gain valuable experience on a sensitive issue.

The Environmental Condition of Tan Brook and Campus Pond, A Community and University Concern, Marita Clay and Robert F. Smith